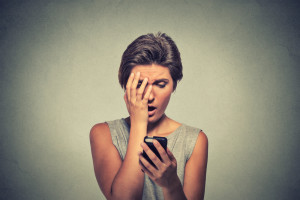 When it comes to divorce proceedings, one social media post could mean the end of your argument in court.

As clients of The Law Offices Of Greenbaum & Pinto are going through a divorce, especially one in which financial and child custody questions loom large, we caution them about the risks posed by social media.

Twitter, Facebook, and other sites can feel like incredibly inviting spaces to air grievances about an ex, vent about a judge, or disparage an attorney. With greater and greater frequency, however, these posts are finding their way back into the courtroom—and usually not to the benefit of the person posting.

Spur of the moment thoughts or flashes of anger can become permanent fixtures on the Internet. When it comes to social media, once a post is made, there is no such thing as “deleting” it.

Mobile devices allow quick and easy access to social media sites. Even if you should make a post and delete it, all it takes is the wrong person at the wrong time to see your post, take a screenshot with their desktop or mobile device, and it is permanently stored to be used against you in the future.

Can They Really Do That?

The First Amendment protects most social media ranting from severe legal repercussions, but an ex-spouse disparaged in a Facebook post does not need to sue for libel to turn that post to their advantage in the courtroom.

Such writings can be used to give weight to an argument that the posting spouse is not fit to have custody of a child, or to shed doubt on that party’s truthfulness or faithfulness.

Amicable divorce proceedings can be soured by an ill-timed social media post about a new significant other, or revelations about a spouse’s participation on an online dating site. The recent uproar after the release of thousands of names of people who signed up on Ashley Madison, a dating website for married people, underscores this point.

Think Of The Children

The majority of young children have access to social media, either through a home computer or their own smartphones or tablets. Negative posts about an ex are available with the click of a mouse to your children, and the courts know that, too.

Judges may look more harshly upon posts from people with children, knowing how easily a child could access demeaning information about a parent made available by the other parent on social media.

Social media outbursts can even affect the terms of a settlement. For example, if a spouse who claims to be unable to pay child support is discovered to be tweeting about extravagant purchases or a recent luxurious vacation, that post will be used against them in court.

There are always clients who are surprised that someone saw a post of photos that the client thought would only be viewed by their “friends” on social media. Even the most stringent of privacy settings cannot protect your posts from being seen by prying eyes.

For proof, one must look no further than social media sites. The Facebook group called “I Hate My Ex Husband”—a page filled with posts detailing alleged wrongs of one woman’s former spouse—has over 5,000 “likes”.

These posts are far from anonymous, although the page admin is obviously attempting to go great lengths to protect her identity. Despite the lack of photos, names, or locations, the detail behind each post outlining every interaction the woman has with her ex-husband can lead to her being singled out immediately by her ex’s attorneys.

A simple Twitter search for terms like “ex-wife” or ‘ex-husband,” quickly turns up just the kind of public attacks that an opposing lawyer could quickly seize on and bring before a judge.

Eight out of 10 family law attorneys reported seeing an increase in cases using social media evidence over the previous five years, according to a 2010 survey of the nation’s top family law lawyers conducted by the American Academy of Matrimonial Lawyers.

It is important for people getting divorced to know the impact that thoughtless social media musings can have on their proceedings. Furthermore, it is crucial to understand that even if you delete a post or attempt to share it with a select group, it can still end up in the courtroom.

Unfortunately, the problems with social media and divorce may be starting much earlier than you may think. More and more often, issues are beginning to arise before the word “divorce” is even uttered.

The Root Of The Problem

In addition to Facebook playing a part in divorce proceedings, there is now thinking that it may also be the cause of numerous divorces.

A report in the Huffington Post found that one in seven people said a factor in their divorce was a spouse’s “questionable activity” on Facebook.

As social media becomes a more significant player in people’s daily lives, it will inevitably play a more central role in court proceedings.

It is extremely important to know the risks that come with using social media while in the midst of divorce proceedings, as well as a lawyer’s responsibility to be willing to use social media evidence on their client’s behalf.

At The Law Offices Of Greenbaum & Pinto, we do not underestimate that the ease and permanency of social media postings have proven to be a dangerous combination in family law proceedings and neither should you.

Get the guidance and advice you need from an attorney you can trust. Contact The Law Offices Of Greenbaum & Pinto today.

Kathleen Greenbaum is a partner at Greenbaum & Pinto.

Get Social With Us!